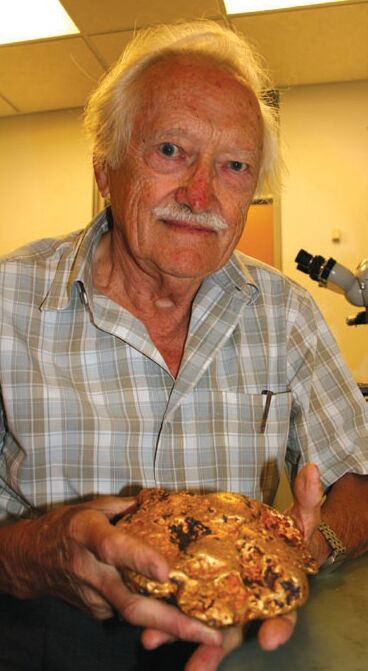 Ernest (Ernie) Nickel, an Honorary Fellow with CSIRO Exploration and Mining in Perth, Western Australia, died on 18 July 2009, a few weeks after being diagnosed with cancer. He was 83. Ernie was an internationally recognized mineralogist, with a unique eponymous relationship with the primary and secondary minerals he most closely studied − those associated with oxidizing nickel sulfide deposits. Latterly, his greatest passions were the classification and nomenclature of minerals. He had a significant impact on international mineralogy through his work with the International Mineralogical Association and professional mineralogical associations.

Ernst Heinrich Nickel was born in Louth, Ontario, Canada, on 31 August 1925, although it was not until he was in his twenties that he learned these were the true spellings of his forenames. During his childhood on a hard-scrabble farm in the years of the Great Depression, his interest in geology was triggered by the great variety of pebbles in the glacial debris that comprised the farm soil. But it was a school excursion to the Royal Ontario Museum in Toronto that led to his abiding interest in the wonderful world of minerals.

Ernie obtained his BSc and MSc at McMaster University in Hamilton in 1950 and 1951, respectively, and his PhD at the University of Chicago in 1953. He then began a long and productive career with the Mineragraphic Laboratory of the Mines Branch, Canadian Department of Mines and Technical Surveys (now CANMET). There, he published nearly forty papers on an eclectic range of topics, including descriptions of three new minerals species, niocalite, wodginite and cuprospinel, along with notes on mineral assemblages from Canadian localities, some papers on colour and pleochroism in minerals, and a contribution on the social responsibility of scientists.

By 1971, Ernie had attained the position of Head of the Mineralogy Section at the Department of Energy, Mines and Resources, and frequently functioned as Acting Chief of Division. However, the increasing administrative load left him very little time for working with the minerals he loved, so he started looking around for a position that would allow him more time for hands-on mineral studies. The nickel deposits in Western Australia had sparked a big exploration boom, which resulted in a shortage of geologists and mineralogists there. Ernie successfully applied for a position in CSIRO’s then Division of Mineralogy in Perth.

Through CSIRO’s strong research links with the mining industry, Ernie was truly in his element (forgive the pun). A series of papers on the primary and secondary mineralogy of the famous nickel sulfide deposits was published during the 1970s and 1980s, including descriptions of the new species carrboydite, nickelblödite, otwayite, nullaginite and kambaldaite. These are hydrated nickel sulfates and carbonates which form greenish crusts and veinlets in the oxidized zone, and they proved to be challenging minerals to characterize. In time, Ernie became a Chief Research Scientist at CSIRO, with minimal administrative duties, but he ‘retired’ early, in 1985, to allow his salary to be used to employ more young scientists. He once remarked that he was fortunate that his work was also his hobby. Consequently, he continued almost full-time as a CSIRO Honorary Fellow for the next 24 years, cycling daily to his office. His published bibliography includes over 120 research papers and books, including 24 new-mineral descriptions. Recently, he catalogued CSIRO’s extensive collection of gold specimens and nuggets, and is pictured here with an 8 kg nugget.

Ernie’s most significant and long-lasting contribution to international mineralogy was perhaps in the classification and nomenclature of minerals. In 1974, he became Australia’s representative on the International Mineralogical Association’s Commission on New Minerals and Mineral Names (CNMMN), now the Commission on New Minerals, Nomenclature and Classification (CNMNC). A decade later, he took on the role of vice-chairman, teamed with noted Canadian mineralogist Joe Mandarino as chairman, and together they launched the CNMMN into a new era. Ernie extended his activities by developing several voluminous databases. He co-authored (with Monte Nicholls) the MINERAL database, which covers all IMA-approved and ‘grandfathered’ species, as well as minerals that have been discredited or redefined; his database is updated regularly for the CNMNC website. With Dorian Smith, Ernie also prepared a coded reference list of unnamed minerals that have been described in the mineralogical literature. His other compilations include the Mineralogical Reference Manual (1991) and the landmark 9th edition of the Strunz Mineralogical Tables (2001).

Professional organisations also benefited from Ernie’s contributions. He had two life memberships in the Mineralogical Association of Canada, joining in 1954 and becoming president in 1970-1971. He had also been a member of the Mineralogical Society of America and the Mineralogical Society of Great Britain and Ireland since the 1950s. The latter society elected him an Honorary Fellow in 2008, fitting recognition of the exceptional contributions he made to mineralogy for over half a century. Ernienickelite – ideally Ni(Mn4+)3O7•3H2O – a member of the chalcophanite group from one of the lateritic Ni-Co deposits of the Kalgoorlie region of Western Australia, was named in his honour in 1994.

During his remarkable professional career, Ernie never lost touch with the world of the knowledgeable amateur collector. He was the ‘go-to’ person for identification of unknown minerals found by collectors roaming the virtually unlimited deposits of Western Australia. Ernie also provided active support to the Australian mineralogical societies and to the Australian Journal of Mineralogy, as both editor and contributor. Family life was always important to Ernie. He had three daughters with his first wife, Muriel, who died prematurely from cancer when she was just 50. Ernie remarried, to Eileen, after they’d met at his local bridge club, where he was president and she was secretary. Eileen survives him, as do his three daughters.

Ernie was very concerned to ‘tidy up loose ends’ when he was confronted by the inevitable outcome of his illness. He remained lucid and stoic to the end, keen for conversation, and this memory of him will no doubt help his family and friends come to terms with his passing.